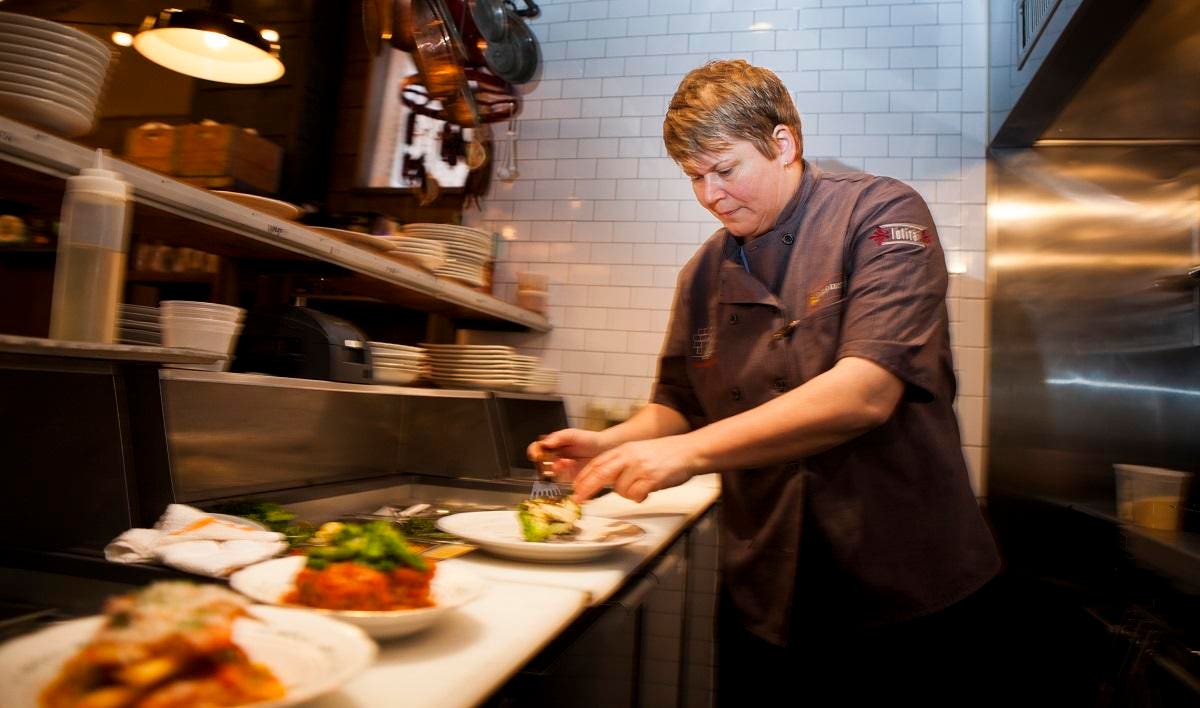 Reflecting similar organizing efforts gearing up around the country, employees of one of Philadelphia’s most influential restaurant and retail groups are collectively asking their bosses to take action to protect their health, livelihood and dignity. On Wednesday, workers from Safran Turney Hospitality’s five local dining concepts presented owners with a letter requesting to return to their jobs based on a fair hiring system that includes better COVID pay and protection, more communication from management and the establishment of a human resources position.

The Organized Collective of Concerned Employees of Safran Turney Hospitality accuses partners Valerie Safran and Marcie Turney, who helped kick-start the transformation of Center City’s Gayborhood from a run-down district into a trendy hotspot, of refusing to follow proper coronavirus protocols, ignoring pleas for legally mandated paid sick leave, failing to establish channels to address grievances, and neglecting to communicate with them about critical work issues.

And that’s just the beginning.

“All of us want our jobs back but we want it done right,” says Mokhtar Bdeir, a server and bartender at the partners’ original restaurant, Lolita.

Since I published this March 19 story that mentioned the Go Fund Me account Safran and Turney set up for out-of-work employees with $50,000 of their own money, I’ve been contacted by half a dozen of their service workers. Because these team members claim no one has officially furloughed or laid them off since Philadelphia issued a citywide coronavirus shutdown on March 16, they don’t know if they have jobs to return to. In mid-June, The Philadelphia Inquirer reported the company had laid off all 275 of its employees. No one told them.

Though the majority of those who contacted me opted not to speak on the record for fear of jeopardizing their chances of renewed employment, their stories closely parallel one another.

The upset employees acknowledge the pandemic caught most Americans off-guard and forced restaurant owners, many of whom still don’t know if they’ll have the funding and staff to re-open and stay open, to continuously make snap decisions about issues they’ve never had to consider before. But they say that doesn’t justify the treatment they’ve received as employees of a nationally acclaimed, 18-year-old hospitality enterprise that agreed to pay $252,500 last year to settle a class-action lawsuit brought by 52 servers who accused their bosses of making them share tips with managers and silverware polishers.

The complaints against Safran Turney aren’t necessarily unique. But they are indicative of just how exposed the nation’s 11 million restaurant employees really are. Now, for what may be the first time, unemployed hospitality workers around the country are using their newfound time off to work for a safer, more equitable industry.

As Lolita sous chef Lisa Ortiz says, “Closing down is what allowed us to utilize our voices. Before, we were too busy.”

Through their public relations firm, I asked Safran and Turney to respond to the requests made in the letter, as well as some additional complaints.

On Thursday afternoon, Safran emailed me this statement: “The letter from a group of former staff was sent to us last night, and we are consulting with our attorneys. For now, we cannot comment further on that matter. Overall, Marcie and I have done our best and everything we can to keep our ten businesses afloat (ed note: they own four boutiques in addition to their restaurants) so that we can fully employ our teams again on the other side of this pandemic. Terms set forth by the city are changing daily, and we have to consider these terms then balance them with what we think is best for our staff and guests. Any business owner who is operating right now can attest to how shaky the ground is beneath us, and every one of us is being forced to make split-second decisions in hopes we come out on the other end with businesses that are able to offer employment.”

Within the letter lies a subtle reference to an incident that Ortiz says happened to a Lolita cook who’d previously worked under her supervision, when he returned to prepare take-out and delivery orders: “We request that Safran Turney Hospitality follows City of Philadelphia guidelines for what to do when an employee tests positive for COVID19, including informing the Public Health Department and following guidelines for cleaning/sanitizing the workplace and quarantining employees who were in close contact with a COVID19-positive individual.”

Ortiz, who hasn’t worked a shift since mid-March but has directly communicated with the cook several times, says he told her he left work when he developed coronavirus symptoms. He then tested positive and quarantined for 14 days. But she says despite him reporting his results to management, no one officially informed his kitchen co-workers of their possible exposure.

“A lot of our long-time kitchen staff quit, I think, because of safety,” says Bdeir. “There weren’t any social distancing protocols and they weren’t providing any personal protective equipment (PPE).”

To address this, the letter to management states, “We request transparency and disclosure regarding the paid sick leave we accumulated prior to the COVID19 shutdown. We request the ability to be paid our accumulated paid sick leave in a lump sum or to be able to utilize that sick leave in the future. We request the ability to call in sick without penalty if we suspect to be infected with, or knowingly exposed to, COVID19, and to elect to receive our entitled sick pay.”

To be fair, practically no one in the country had access to appropriate PPE for the first month or two, and social distancing in a cramped commercial kitchen can prove impossible.

Yet despite the federal Families First Coronavirus Response Act that requires certain businesses to pay coronavirus-positive employees for time off, Ortiz says the cook tells her he received no paid sick leave. As is commonplace around the city, workers say management also did not inform them that a 2015 Philadelphia law allows hospitality workers to accrue one hour of paid leave per every 40 hours worked, and a COVID-era addition requires owners to pay it out before laying off the recipient. Staffers allege that inquiries about pay-outs went unanswered.

However, many employees may not get the chance to collect on future illnesses. They allege that managers are picking and choosing favorites to re-hire to help with limited operations and skipping over those who’ve questioned management in the past. U.S. employers don’t have to return jobs to their previous holders, and, as I wrote in this story, some seem to be using coronavirus as an excuse to clean house and bring in new workers at a lower pay scale.

According to Ortiz, at Safran Turney, anyone who hasn’t gotten called back and wishes to return must reapply for their old job. Meanwhile, her co-workers say, the company is advertising openings.

Disgruntled employees not only decry the unfairness of this approach but consistently bring up the fact that no one has ever communicated the status of their jobs or concrete plans for closing or re-opening.

On March 18, 48 hours after the Lolita lunch crew heard the restaurants might temporarily close and, in the absence of instruction, warned the dinner crew to reconsider coming in, Director of Operations (DO) Joshua Mann sent out a company-wide email telling employees to go ahead and file for unemployment and provided a bit of guidance.

However, one Lolita server who didn’t want to give her name for fear of retaliation calls the email condescending. As she describes it in an email to me, “The DO wrote things like: ‘This is tough for everyone and all I want is a hug right now!’ and ‘Please follow our restaurants on social media and re-post the special takeout menus that we’re putting out daily!!’ (this was the only thing underlined for emphasis in the email).”

Several employees say they didn’t hear from work again until May 29, when Safran emailed to tell remaining staffers to come collect payouts from the Go Fund Me campaign. But even that chaffed, given that they say the fund was something their bosses had never mentioned outside of my article, neglected to promote, and cashed out a month after the promised end date.

Bdeir, who echoes his colleagues in lamenting that he’d been denied the opportunity to raise money for the fund or collect earlier, when they really needed it, received $261.

Among employees’ list of demands is a return to pre-COVID wages plus hazard pay for kitchen staff until Philly restaurants can fully re-open. For tipped front-of-house staff, either $15 per hour plus tips or the ability to work minimal hours so they can continue to collect unemployment.

Bdeir is leaving for medical school in the fall and will no longer rely on tips for his livelihood. But most of his co-workers will.

“A big upsetting thing to back-of-house staff was they weren’t rehired at the same rates as before. As the weeks went on their paychecks decreased,” he says.

According to Bdeir, Ortiz and others, hourly and salaried cooks and managers brought back to cover take-out and subsequent outdoor service are earning less than their previous wages.

“A manager they called back is getting server wages, told to work for tips,” says Ortiz. “They’re going back in the hopes they get their old salary back.”

Despite opening their first business in 2002, Safran and Turney’s team members say they don’t have a human relations department or point person. Now that they’re organizing for change, employees are demanding the women set one up. Until that happens, they want an outside team in for anti-harassment training.

As the letter states, “We request that Safran Turney Hospitality hires outside professionals, such as the Coalition for Restaurant Safety and Health (CRSH), to train all employees annually in the City of Philadelphia’s Sexual Harassment Prevention Policy… We request that all existing and future reports of workplace harassment—sexual harassment, racism, homophobia/transphobia, etc.—be properly documented, investigated, and taken seriously by upper management for the protection of all employees.”

Team members wrote the letter with help from the volunteer organization Philly Workers for Dignity, which is advising other Philadelphia restaurant workers on their own demands for more rights.

Says volunteer organizer Kevin McCloskey, “Workers are getting screwed at a time when the rate of COVID is going up, and I think this is the best time for workers to get to know their rights and really fight for them.”