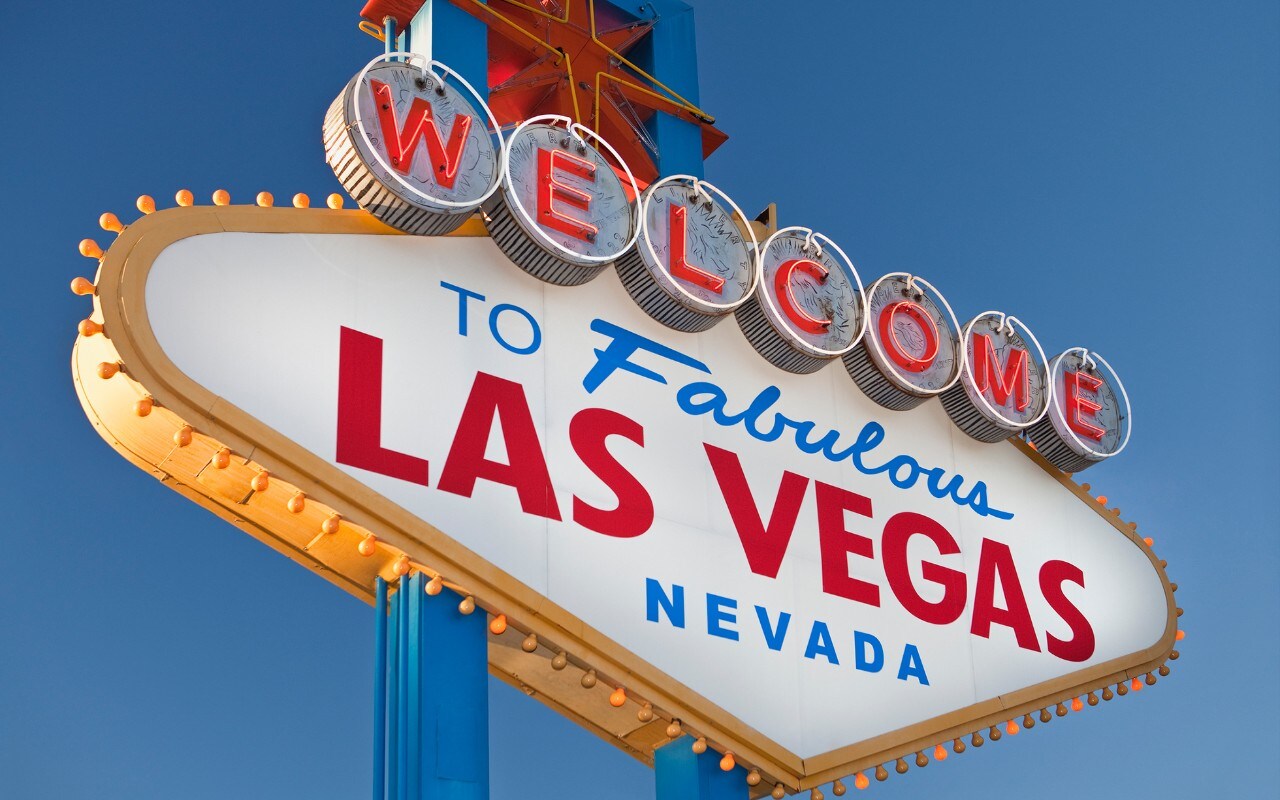 You might argue that Las Vegas is a place that cannot possibly be enjoyed at a distance. The Nevada metropolis is a temple to sensory overload – a gleaming oasis in the desert where visitors eat well and party late, watch shows whose production values cost the equivalent of a small country’s GDP, and wager the mortgage in casinos where reality never intrudes. But while this may be true, “Sin City” has also been the subject of many works of cinema, music, literature and art – so that, even if you cannot bet it all on black in person, you can still sample some of its ambience from the comfort of your own sofa.

You have a choice of two here – the initial incarnation of this classic heist movie, with the Rat Pack (including Frank Sinatra, Dean Martin and Sammy Davis Jr) in their pomp, or the 21st century reboot with George Clooney, Brad Pitt, Matt Damon and Julia Roberts  pulling a few tricks to relieve a casino owner (Andy Garcia) of a fortune. The latter is a rare case of a remake improving on the original, although the gist is much the same – a salute to Vegas’s capacity to be sophisticated and seedy at the same time, in a variety of sharp suits. If you prefer your gang flicks with a little less all-grinning masculinity, 2018 spin-off Ocean’s 8 plays the same card with a female cast (Sandra Bullock, Rihanna, Cate Blanchett, Anne Hathaway and Helena Bonham Carter all included) – albeit in New York.

Vegas has worked hard to transform its image from “mafia playground” to “fun for all the family”, but it is hard to escape the former entirely when movies as compelling as Martin Scorsese’s 1995 masterpiece exist. A close cousin of the same director’s GoodFellas (1990), it features star turns from Robert De Niro, Joe Pesci and, especially impressively, Sharon Stone – who earned an Oscar nomination for her performance as a dancer turned mob wife. Set in the city of the mid-Seventies – with appearances from real-life casinos like Bally’s and the Riviera (now demolished) – this tour-de force depicts the violence and corruption of the era so completely that cigarette smoke all but pours from the screen.

If a television show using a stylised version of the city’s name – complete with dollar-sign – didn’t already exist, something would have gone wrong with the space-time continuum. As it is, Vega$ ran for three seasons in the late Seventies and early Eighties, and revolved around a Vietnam veteran turned private detective (Robert Urich) solving crimes on and around the Strip – while driving his red 1957 Thunderbird convertible. Obviously.

Buy: On DVD via Amazon

TV producers deserve no points for imagination when it comes to naming series about Sin City, but this comedy-drama about the comings and goings at a fictional casino did a fair job of approximating working life in the Nevada metropolis. It managed to stretch its existence to five seasons, arriving on screens in America in 2003, and finally dropping off the schedules in 2008. It largely starred James Caan as a former CIA officer turned president of the “Montecito” complex – but was also notable for its cameo appearances, with the likes of Jean-Claude Van Damme, Dennis Hopper and Alec Baldwin popping in.

Buy: On DVD via Amazon

Sinatra At The Sands

Ol’ Blue Eyes’s association with Las Vegas went far beyond smirking in Ocean’s Eleven. The city was the launchpad for a career revival that began in the early Fifties, and slowly rebuilt his profile – to the extent that, by the mid-Sixties, he had eclipsed the success of his youthful years, playing to adoring crowds in the glitziest casino-resorts. On this basis, a Sinatra concert album is pretty much the gold-standard Sin City soundtrack. Sinatra At The Sands was one of the landmark LPs of his rebirth – its versions of Come Fly With Me and I’ve Got You Under My Skin date to 1966. In being recorded at the Sands – one of the unconstrained, unreconstructed cornerstones of the Strip (demolished in 1996) – it also captured the soul of the Old Vegas, in which the Rat Pack crooned and punters swooned.

For Sinatra in 1966, read Elton John between 2004 and 2009. The erstwhile Reg Dwight played a five-year residency at Caesars Palace that saw him reel off a 15-track setlist – generally including Rocket Man, Candle In The Wind, Your Song and I’m Still Standing – to happy full houses. A decade-plus later, the shows live on as a DVD-and-CD package.

Sin City’s febrile atmosphere has not just been a boon to heritage acts seeking to recapture former grandeur – it has helped sons and daughters of the city create new music. Although approaching middle-aged-statesmen status themselves now, Vegas upstarts The Killers were very much young pups when they wrote and released this 11-track slice of alternative rock sparkle – their debut album – in 2004. Hot Fuss has aged well. It is not directly about the city, but it is certainly of it, in its energy and ambition. The five-minute All These Things That I’ve Done dreamed of stadiums even as it played small clubs; Mr Brightside is still a festival anthem over a decade and a half after it burst into the world.

There are very few laughs in John O’Brien’s semi-autobiographical 1990 novel about an alcoholic writer who moves from Los Angeles to Vegas with the intention of drinking himself to death – and its sense of tragedy was hardly lessened when its author killed himself four years after it was published. Nonetheless, it sketches out the underbelly of the city in grimy detail. If wading through its claustrophobia page by page sounds too much, the Oscar-winning 1995 movie adaptation – with Nicolas Cage and Elizabeth Shue in the starring roles – tells the same unflinching story, but rattles through it in two hours.

Thompson’s “gonzo journalism” tends to divide opinion – being either hailed as the words of a genius reporting back from astral plains far beyond sobriety, or decried as the self-indulgent ramblings of a man who absorbed far too many narcotic substances and felt the need to brag about his experiences in print. Sitting down with a copy of Fear and Loathing… won’t change your opinion – but it is the classic example of his trademark style. And it skewers the decadence of Sin City nicely, finding the city lolling in the sun in 1971 – just as the hippy movement seems to be running out of steam and patchouli oil.

Order: Blackwell’s; Waterstones; Amazon. RRP £8.99. As an audiobook via Audible

Books about Las Vegas do not have to be about casinos or comedowns. This sharp 2008 novel presents a more ordinary version of the city, charting the lives of a group of friends who have grown up in its suburbs, and have either embraced or rejected its neon lifestyle.

A city as unconventional as Las Vegas is always likely to offer street art as eye-catching as anything on its gallery walls. Urban artist Doze Green may be a New Yorker by birth, but he crafted one of the Nevada city’s most intriguing murals in 2010. Daubed onto the walls of an underpass at the City Center tram station, Crossroads of Humanity lays out a sprawling crowd-scene of faces and torsos in a sea of swirling blue. What does it all mean? Well, you can watch a video of its creation on YouTube – and decide for yourself.

Few cities (outside China, anyway) have Vegas’s instinct for ripping down and rebuilding; a restlessness of spirit and a demand for “bigger, better, faster, more” that has seen many of its casinos and hotels – even hugely celebrated ones like The Sands and the Desert Inn – condemned to rubble in the last half-century. Some of them, though, live on, in the Neon Museum – which since 1996, has made a habit of gathering up old signs and fluorescent relics, and keeping them as ghosts of decades past. Its Neon Boneyard area – some of which can be seen online – is fascinating; a vast memento mori asleep in the dust.

You probably don’t think of Vegas as a sporting destination. Moreover, Vegas doesn’t think of itself as a sporting destination. But that doesn’t mean you can’t hear the thwack of ball on bat in the still Nevada air. The Aviators are a Minor League Baseball (MiLB) team, and they play at Las Vegas Ballpark – a state-of-the-art stadium which opened in Summerlin, on the west edge of the conurbation, last year. You can grab a glimpse here.

Let’s return to the casino. Specifically, let’s return to one of those old-fashioned Vegas casinos which keeps it to the basics of blackjack and booze. And let’s go in particular to the Golden Gate Hotel, which has haunted its location – on Fremont Street, in the heart of Downtown – in various guises and under various monikers since 1905. Its main watering hole – Bar Prohibition – nods its head to an era of alcoholic restraint that the city may or may not have paid full attention to. How much it did so is probably visible in the name of the Bootlegger cocktail – which splices rum, banana liqueur and fruit juice. Details here.

Discover the best of Las Vegas

You can find just about any style of cuisine – from haute to low – in Vegas, but the city has long had an affinity for Italian-American dishes. How could it not when the unashamedly gaudy Caesars Palace is one of its most famous landmarks? Said hotel has a branch of Rao’s – a pasta-and-parmesan specialist that opened its first restaurant in New York in 1896. It sells a bowl of “Traditional Meatballs” which wraps up chunks of ground veal, pork and beef in breadcrumbs and marinara sauce. It’ll cost you US$21.99 (£18) if you order it in situ – but you’ll be able to make it for a lot less if you get cooking at home. Menu here.

How hotels are adapting to the new reality of COVID-19
The hidden wonders of England’s most ‘boring’ county
9 Hypnotizing Techniques Used To Make Candy
Visit Stockholm – 5 Things You Will Love & Hate about Stockholm, Sweden
This is now the world’s busiest airport… on certain Saturdays