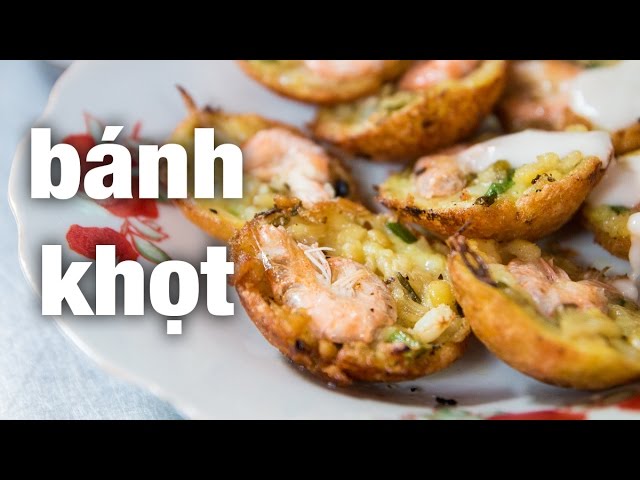 There are a near infinite amount of delicious foods to eat when you’re in Vietnam, and one of my favorite light snacks or small meals is banh khot (bánh khọt). In English they could be called a number of different things, but most of the time they are translated as mini or crispy pancakes. The batter is made from a combination of rice flour and sometimes even day old cooked grains of rice, mixed with lots of rich coconut milk, and a sprinkle of turmeric to give them that tempting yellow color. The batter is then fried in a mini griddle, similar to Thai style khanom krok, in lots of oil so the edges get extremely golden crispy yet the center remains a bit gooey and soft. Banh khot is then served with a typical plate of raw leafy vegetables and herbs which are used to assemble each bite.

When I was in Saigon, and searching for delicious Vietnamese street food one day we were walking through Chợ Bàn Cờ – a local market in the Saigon. I could honestly smell the aroma of frying banh khot before I ever saw it. The smell was incredible, and after walking around the packed alleys of the Vietnamese market for a while, we eventually stumbled into the source of this delicious street food snack, hiding within the market, surrounded by other vendors, and a continual crowd of hungry customers. She had a number of stools there to eat at, but the majority of her banh khot customers were buying for takeaway, to take home and eat later. But since there were a couple of empty stools as we arrived, Ying and I immediately jumped at the opportunity, and soon we were sitting within the crowds, catching whiffs of the irresistible mini pancakes and waiting for our plate to finish frying.

It took a few minutes as she had a few banh khot order ahead of us, but soon enough out plate of delicious Vietnamese pancakes was placed before us, and she asked if we wanted a scoop of extra coconut cream on top. I decided to get half and half, though if I ate here again, I’d probably get them all topped. The mini banh khot pancakes were incredibly crispy and golden yellow on the bottom, they were creamy and soft on the inside. I saw some people dipping their pancakes into the sweet fish sauce dressing, then adding them to a handful of leaves and then eating, and I also saw other just wrap everything together, the dip into the sauce. I tried both methods, each was equally delicious.

Banh xeo, in southern Vietnam is a huge crispy crepe, while banh khot are much smaller in size, and I think they are much more hearty because of the thicker batter. While both are eaten in a very similar method with lots of herbs and the same nuoc cham fish sauce for dipping, overall I preferred banh khot – with that coconut milk and shrimp it was so good! While you can find these mini pancakes all over, I think it makes one of the best Vietnamese street food dishes – it’s such a great dish for eating at a market or on the side of the street, a piping hot plate of crispy goodness, contrasting the fresh herbs and vegetables. When you’re in Saigon, don’t miss the opportunity to dig into some delicious banh khot.

This particular stall I ate at was in Saigon somewhere in the laves and back alleys of Chợ Bàn Cờ market, just a local neighborhood market. But you’ll find exact street food stalls just like this throughout the city.

Here are more details about this exact spot: http://migrationology.com/2015/01/banh-khot/

Thank you very much for watching, hope you enjoyed this food video.

Music in this video is from audionetwork.com