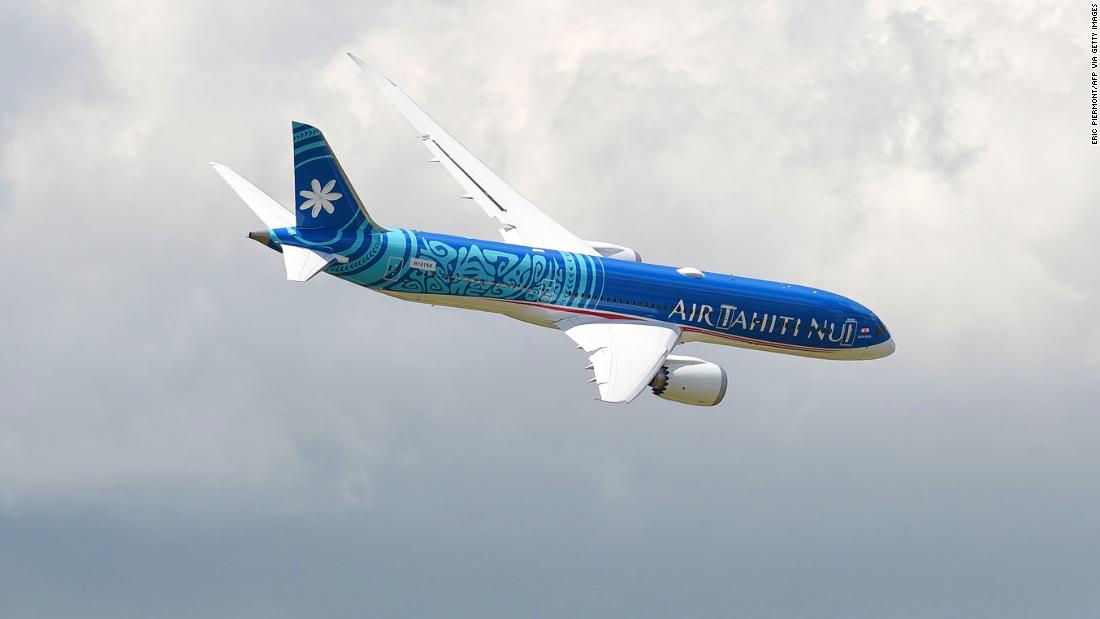 (CNN) — The aviation industry has been hit hard by the coronavirus pandemic, with travelers across the world dealing with canceled flights and travel bans as they scramble to get home.

But one unlikely aviation side effect is the creation of a new world aviation record.

This one off milestone was a direct consequence of the coronavirus-induced US travel restrictions.

This route usually involves a scheduled stopover at Los Angeles International Airport (LAX). But when an airplane stops over in the US, all passengers must alight the aircraft and proceed through US Customs and Border Protection before they’re allowed to advance on with the next leg of their journey.

Current restrictions rendered this part of the journey untenable, so instead, flight TN064 just carried straight on, departing at 3 a.m. local time from Papeete airport and arriving in Paris at 6:30 a.m. local time on March 15.

The Air Tahiti Nui flight was operated by a Boeing 787-9, like this one, which was photographed at the International Paris Air Show on June 17, 2019 at Le Bourget Airport, near Paris.

“This flight was operated on an exceptional basis and within the constraints imposed by the American authorities in the face of the Covid-19 epidemic,” an Air Tahiti Nui spokesperson told CNN Travel in a statement.

The flight, which was airborne for just under 16 hours, became the world’s longest commercial flight in terms of distance traveled.

The flight overtook the previous record held by Singapore Airlines, which offers a scheduled passenger service between Singapore and Newark covering a distance of 9,534 miles.

Australian carrier Qantas set a different record for the longest flight late in 2019. It’s experimental Project Sunrise test flight clocked up about 11,060 miles and 19 hours and 19 minutes nonstop between London and Sydney. But since there were no fare-paying passengers aboard, it doesn’t count as a properly scheduled service.

TN064 is also the world’s longest scheduled domestic flight, because it traveled between French Polynesia and mainland France.

Air Tahiti Nui tells CNN Travel the aircraft flew with a “reinforced crew” of four pilots, and was operated by a “next generation aircraft” a Boeing 787-9, twin-engine Dreamliner.

The aircraft was reportedly nowhere near full, which meant it was able to proceed the full stretch without refueling.

Air Tahiti Nui says it was an “exceptional flight, operated in a special context”, and adds it demonstrates the airline’s commitment to keeping up transit links between France and the overseas territory.

“But is not destined to be perpetuated,” adds the spokesperson.

Since the weekend, the airline’s been substituting its usual stopover in Los Angeles with touchdowns in Vancouver, Canada or Pointe a Pitre, in Grande-Terre, Guadeloupe — although the Canadian option’s now been ruled out as the north American country introduced a travel ban on March 16.

American Airlines cutting international summer schedule by 60% as coronavirus drives down demand
One of Australia’s most popular professional sports could relocate to a tropical island during the coronavirus pandemic
How to stop disease spreading on airplanes and ships
India’s Oyo budget hotel chain pledges to house coronavirus frontline staff and those stranded
The Ritz-Carlton Los Angeles, luxury in LA