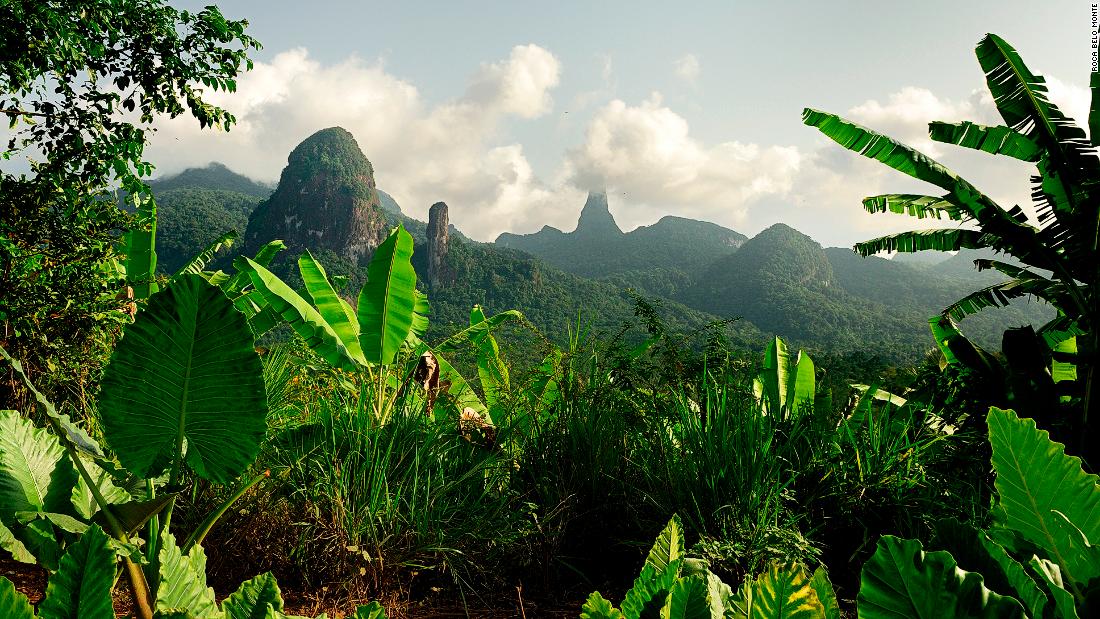 (CNN) — Wander amidst the faded colonial splendor of Sao Tome, the capital of Sao Tome and Principe, and it’s easy to be charmed by the African city’s laid back, tropical simplicity.

Traders jostle to sell their wares at the bustling central market while fishermen laugh and joke by the large bay that swoops around the city.

Follow the promenade along the coast towards the edge of town, meanwhile, and a rural paradise of palm-lined beaches and stunning biodiversity awaits.

Uninhabited until being discovered by the Portuguese in the late 15th century, Sao Tome and Principe is a tiny archipelago situated in the Gulf of Guinea.

It became a outpost of the slave trade under Portuguese rule, with sugar cane, cocoa and coffee all prominent exports.

Labor practices thankfully improved over the centuries and independence eventually arrived when the Portuguese left in the mid-1970s.

Yet Sao Tome and Principe is once again attracting the attention of international explorers, this time in the shape of tourists.

The country’s aim is to increase visitor numbers by 10% each year, he adds, and ensure tourism becomes a prominent economic pillar.

Despite its enviable natural beauty, Sao Tome and Principe remains a developing nation. The World Bank estimates that around a third of its 200,000 citizens survive on less than $1.90 per day.

But Menezes believes tourism can help bring investment and a range of benefits that will aid its development, hence the push to attract new visitors.

For those who do come, the allure of Sao Tome and Principe is clear from the moment of arrival.

The islands’ remoteness — situated roughly 160 miles (260 kilometers) off the coast of Gabon — has helped maintain a remarkably varied ecosystem. Lush rainforests rich with endemic plants and species cover large swathes of both islands, while white sandy beaches and crystal-clear waters are plentiful.

Hiking, diving, snorkeling, trekking, exploring the unique flora and fauna as well as landmarks like the Pico Cao Grande (a stunning 1,213-foot-tall peak that rises sharply above the rainforest) are among the most popular attractions.

Yet Miguel also points to the island’s history, culture and unique gastronomy as other key aspects to be explored.

At Roca Sao Joao dos Angolares — an old plantation in the southwest of Sao Tome island that has been transformed into a restaurant, hotel, and art space by TV chef Joao Carlos Silva — visitors can experience lavish Sao Tomean cuisine full of extravagant tropical flavors.
Towards the mountainous interior of the island, meanwhile, the Casa Museu Almada Negreiros serves up similarly delightful fare with stunning views over a verdant hillside canopy.
Other attractions include the sprawling Monte Cafe plantation where visitors can learn about the coffee-making process as well as the brutal history of those who were brought to the island as slaves and bonded laborers.
A unique expression of the islands’ culture and history can also be found in its public theater tradition, known as Tchiloli, while the Auto de Floripes festival is held every August and sees much of the island’s population participate in reenactments of historic battles between Christians and Moors.

Significant challenges remain in modernizing the infrastructure of Sao Tome and Principe. There are currently no ATMs on the islands while deep potholes scar many roads in the capital.

Dilson Carvalho of the Sao Tome and Principe tourist board told CNN Travel by email that plans were afoot to introduce ATMs by the middle of 2020, while new roads and improvements to existing potholed streets are also in the pipeline.

Carvalho adds that by boosting tourism, Sao Tome and Principe also hopes to raise awareness of the need to protect the country’s unique but delicate ecosystem while also providing economic opportunity for its citizens.

A focus on sustainability is already something many resorts across the islands have sought to develop on their own accord.

On Principe, around 112 miles northeast of Sao Tome, a handful of high-end resorts have made preservation of the island’s distinct ecological makeup central to their operations.

Principe is a Unesco Biosphere Reserve due to the diverse range of endemic plants, birds, insects and marine species found there.
South African billionaire entrepreneur and one-time space tourist Mark Shuttleworth owns three high-end resorts on Principe, including the five-star Sundy Praia Lodge, that aim to put sustainability at the heart of their offering.
A short distance away, the Roca Belo Monte Hotel allows guests to mingle with researchers who have been invited to use the property as a base for their work and studies.

Resort owner Rombout Swanborn tells CNN Travel about how the islands are known as the “African Galapagos” because of the sheer number of unique plants and species that have evolved there, cutoff from the outside world, over many millions of years.

Some of the profits generated at Roca Belo Monte are reinvested into conservation projects on Principe, Swanborn continues, while he also points out that tourism has become a major employer on the island.

“What we are trying to demonstrate is that high-end tourism can conserve nature and create employment and local welfare,” Swanborn says.

“Hopefully, people make the link between employment and the attraction of the nature and that creates a productive cycle,” he adds.

Those in charge of tourism in Sao Tome and Principe will hope the same.