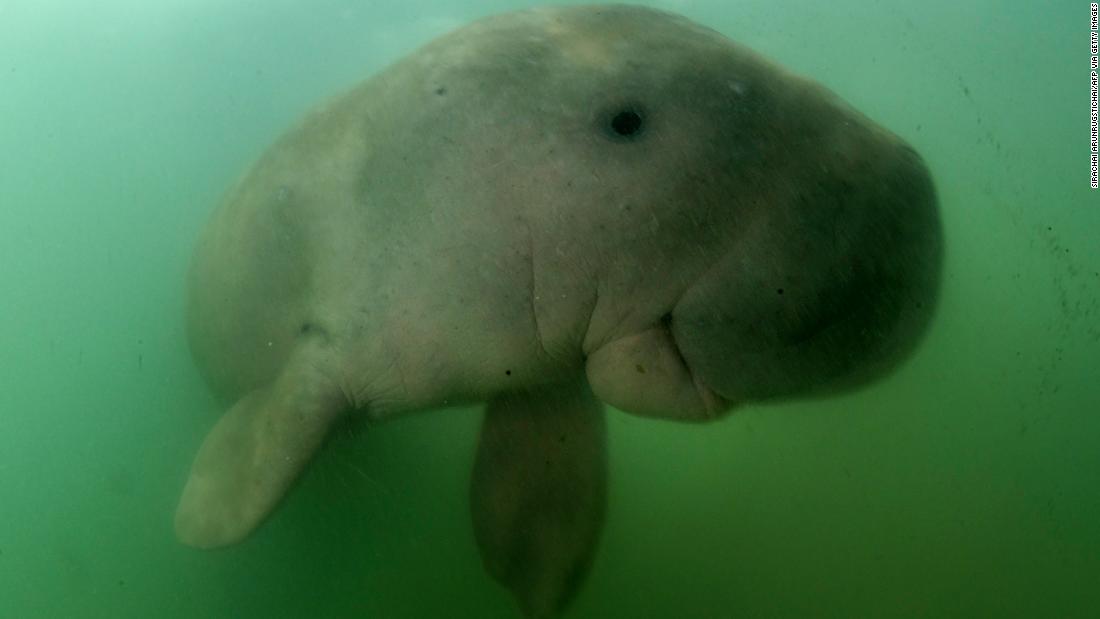 Marium the infant dugong, from her dolphin-like tail to her stubby snout, was a grey and pink superstar. She went viral after being rescued in April in Thailand’s Krabi province, where she’d been spotted by local residents, drifting near a beach, skeleton-skinny and alone.

Veterinarians from Thailand’s Department of Marine and Coastal Resources (DMCR) determined that Marium was orphaned, as dugongs usually stay with their mothers until they are 18 months old.

Only 200-250 dugongs — which resemble manatees but live in the sea rather than fresh water — live in Thai waters, with the species listed as vulnerable to extinction.

The vets, determined to save the rare creature, moved Marium to Koh Libong: an island in the Andaman Sea with around 4,000 largely pro-dugong humans living on it. The water’s abundance of seagrass, the animals’ main food, has resulted in around 70% of Thailand’s dugongs living around the island.

Park officials and veterinarians care for Marium in the waters off Koh Libong in southern Thailand.

With only a smattering of resorts, alcohol scant due to locals being mainly Muslim, and absolutely no full moon parties, Koh Libong receives far fewer tourists than nearby islands such as Koh Lanta. Ride a scooter over jungle paths to one of its ruggedly beautiful northern beaches, and your only companions are likely to be monitor lizards and macaques.

Marium’s presence, though, placed new focus on the area. The vets cared for her 24/7, standing in the ocean in wetsuits to feed her sea grass and milk formula, and encouraging her to swim.

Headline variations of “Thailand falls in love with orphaned baby dugong” ran on news sites, as the DMCR set up cameras broadcasting Marium’s splashy antics, declaring her “the nation’s sweetheart”.

There was optimism that the attention could prompt authorities to increase funding for dugong conservation across Thailand.

Such efforts, it was hoped, might dovetail with the effects of new marine animal-friendly laws such as a ban on Thai retailers giving customers plastic bags, implemented in January 2020.

But on August 16 Marium died, with vets finding plastic trash in her stomach. Online mourners replaced heart-eyed emojis with pixelated tears, as Koh Libong faded from the Thai public’s attention.

For many Koh Libong residents, dugongs were a big part of life long before Marium showed up. During a visit to the island in August of 2019, locals near a dugong-spotting tower in a rickety fishing village broke into happy chatter when the species was mentioned.

“As kids we’d search for snails near the shore and see dugongs every day,” says Suwanee Jiemai, a smiley seafood business manager wearing a blue hijab. “We played with them like they were babies.”

As well as their Pokemon character-like appearances, dugongs’ inquisitive instincts helped them bond with the islanders. The animals are covered in tactile hairs, which are believed to make them sensitive to touch and keen to nuzzle.

Off Koh Libong, where dugong-watching boat trips are offered and various dugong spotting platforms have been erected, the creatures regularly seek out vessels to give them friendly nudges.

“Sometimes dugongs crash into my boat,” says clam diver Wit Jilao, gesticulating excitedly by a coffee stall on the village pier. “Sometimes they crash into me! We name them — one’s called Laai [which translates to ‘Pattern’] because he has patterns on his side.

“When we see them in trouble we help, releasing them from nets or taking them back to water when they’re stranded. We feel like they’re friends, and everyone in the village protects them. We feel a bond between humans and dugongs here.”

Large dugongs can weigh over 300 kilograms. Having flippers not equipped to move their bodies without water buoying them, they regularly get stranded on Koh Libong during low tide.

Locals have set up messaging app groups where they report sightings of the beached animals to each other, then mobilize teams to carry them to the ocean.

Human-dugong relations weren’t always so friendly on the island. Locals used to eat the creatures, which were easy to spear because they approached boats. According to Jiemai, from 1992, when dugongs became legally protected, the islanders largely took them off the menu. Myths such as dugong tears being useful for casting love charms, and their teeth bringing luck, became less prominent.

Now evidence of dugong hunting around the island is rarely found, and causes uproar when uncovered. In 2017 rangers there found a dugong corpse in a mangrove, saying it proved that the creatures were still killed for meat and body part trading.

Some residents reacted by claiming that the evidence was planted. The suggestion that some locals still killed dugongs was seemingly too offensive to contemplate.

Marium’s former carers hope that her death will not have been in vain. Despite the good intentions of the Koh Libong residents, dugongs, of which there are believed to be around 7,300 globally, still face many dangers in Thailand.

At least 21 dugongs have been found dead in Thai waters in 2019: a record high since records began in the country. Most of the deaths were caused by fishing nets.

“Fishing areas often overlap with dugong habitats,” says Nantarika Chansue, director of Chulalongkorn University’s aquatic animal medicine unit in Bangkok. “We’re hoping for change from top to bottom — not only the behavior of people but changing policy, laws and enforcement.”

This picture taken in May 2019 shows Marium swiming in the waters around Koh Libong.

Thailand’s government has made noises about positive change since Marium’s death, with a conservation plan dubbed ‘The Marium Project’ awaiting cabinet approval.

Varawut Silpa-archa, Thailand’s natural resources and environment minister, said he wanted the country’s dugong population raised to 400. Change could involve banning fishing equipment dangerous to dugongs in zones around in the country beyond Koh Libong’s waters.

For now, though, close to the helpful humans living on Koh Libong remains the safest place for a Thai dugong to be. Marium was, says Jiemai, “an ambassador for dugongs. But we feel attached to every dugong in this area. They’re in our hearts.”

From Trang — the closest Thai mainland city to Koh Libong with an airport and railway station — take a taxi to Hat Yao pier (40 minutes, around 550 baht via the Grab app).

At the pier catch the longtail ferry to Koh Libong (25 minutes, 40 baht), which leaves when full, usually departing every one to two hours from roughly 9 a.m. until 4 p.m. To avoid waiting hire a private longtail from the pier to the island (around 550 baht).