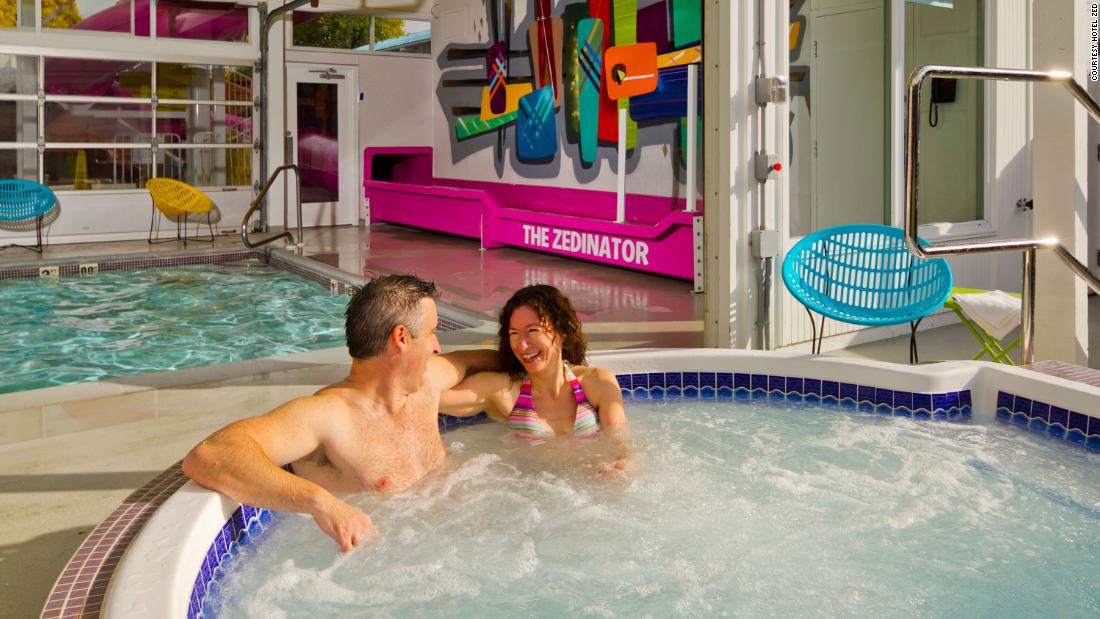 Kelowna, British Columbia (CNN) — For Valentine’s Day this year, you could indulge in a cocktail-paired tasting menu at a top Vancouver restaurant, jet off to Whistler for a ski holiday or book a cozy lodge on the west coast of Vancouver Island to storm watch.

But for those tired of such romantic (Canadian) clichés, British Columbia’s Hotel Zed has a heart-day alternative.

The hotel, with locations in Victoria and Kelowna, is offering a four-hour “Nooner” special on February 14, which it has done for the past five years. Couples can check in from 10 a.m. to 2 p.m. (rates start at $59 CAD) for some nookie, followed by a game of post-coital ping-pong in the lounge or perhaps a sexy soak in the outdoor hot tub.

The Canadian hotel chain has locations in Victoria and Kelowna and is set to open one in Tofino this year.

This holiday the hotel chain is raising the stakes with a baby maker promo — if sweethearts welcome a bundle of joy into their life nine months after the Nooner rendezvous, they’ll win a free stay at the Hotel Zed of their choice for the next 18 years. (Need further incentive? A new Zed is opening this summer in Tofino, a secluded hamlet on Vancouver Island famous for its rainforest hikes and surf breaks.)

Hotel Zed CEO Mandy Farmer came up with the original Nooner idea when her kids were little and she was struggling to find quality, child-free time with her husband. The prospect of a romantic tryst on February 14 was more appealing to her than a bouquet of carnations or a box of chocolates, so she took the idea to the board and they ran with it.

This year’s baby making incentive seemed like a fun twist — the holiday is notoriously known for engagements, so why not conceptions?

“I don’t think we’re going to convince someone who’s not thinking about having a baby to have a baby. But if you’re serious about expanding your family, why wouldn’t you try?” Farmer asks. “If you succeed, you’ll win a way to celebrate your baby’s conception for the next 18 years.”

Any baby, any way

Couples who become parents through surrogacy or adoption also qualify for the promo.

Hotel Zed is a Pride at Work partner, and the promotion is open to everyone regardless of gender identity, expression or sexual orientation. This means couples can still win the prize through surrogacy or adoption. Attention dog lovers: Fur babies don’t count.

In certain circles, “nooner” is slang for illicit quickie, so the Valentine’s special comes across as tawdry to some.

The hotel has received criticism through letters and comments on social media calling it shameful and disgusting. Since the baby maker promo launched on January 14, one Facebook user has accused the contest of discriminating against people who don’t want kids or who already have kids. The hotel responded directly to the Facebook post by saying it doesn’t mean to discriminate and will take that into account for future contests.

The promotion is meant to be playful and encourage happy, healthy sex lives, says Farmer. It’s also consistent with Hotel Zed’s brand, which is all about being different.

Both the Victoria and Kelowna properties are upcycled motels decorated with a nod to the 1970s. In the Kelowna Zed, located downtown across from City Park beach on the shore of Okanagan Lake, the lobby features low-slung couches and mod light fixtures, and the bright colors of the disco decade light up the walls, upholstered chairs and throw pillows.

Guests can play an ABBA album at the vinyl listening station, compose a letter home on one of two vintage typewriters, or try out a pair of the four-wheel roller skates for free. There’s even a tiny disco, complete with a fog machine, mirrored disco ball and a karaoke set up.

“It’s not huge but we like to think of it as intimate,” says assistant manager Kaileigh Battah.

This sentiment could describe the entire property.

From the cozy living room-style nook off the lobby and inviting window seats inside the Ping Pong Lounge, to rooms with cute kitchenettes, fun color schemes and comic book reading material, it feels more like your cool friend’s retro home than a hotel. Rooms even have rotary phones and instructions that explain how to use them.

One returning couple likes the special touches, including candy cigarettes on the nightstand.

The funky atmosphere and comfy bed in The Kitschy King room, Battah’s favorite, just might get contest participants into a baby-making mood.

But would a winning couple want to return to Hotel Zed year after year on Valentine’s Day?

For Kelowna resident Jenn Sutton and her husband the answer is yes. They’ll be checking in to Hotel Zed this February 14 for their fourth Nooner. It’s become a Valentine’s Day tradition ever since a friend bought them a gift card three years ago.

“It’s a really fun vibe in the hotel and they do an outstanding job,” says Sutton. “They leave us little candy cigarettes on the nightstand, and last year there was a deck of naughty cards in case we wanted to get creative with positions.”

The couple won’t be trying for a baby, however — they already have two teenagers.

“We will cheer on others,” Sutton says with a laugh.

Lisa Kadane is a travel and lifestyle writer based in Kelowna, British Columbia.

A resort in the desert proves there’s more to Utah than just skiing
Disney’s Riviera Resort brings Europe closer to home
United Airlines gives $90,000 in travel vouchers for downgrading passengers
Q&A FROM THE PLANE! – World Flight Episode 22
More than just moai statues — what to expect from a visit to Easter Island